Following the successful passing of the review process of the European Union, the M24 meeting in Austria gave the opportunity to look back at two years of CO2EXIDE development

The CO2EXIDE project has successfully passed the review process of the European Union that each project funded by the EU has do undergo at its mid-stage. So far, the project has achieved very good results. This feedback from the commission meeting in Brussels was discussed with the project partners at the Month-24 meeting, which took place on the 11th and 12th of December in Gumpoldskirchen, Austria. The first project period focused on catalyst development with the drawing up of concept definition and design guidelines. Another focus lied on the study of the benchmark systems for the analysis of potential impacts of a CO2EXIDE technology roll-out in Europe. In the second half of the project, the integration of the electrolyser, the ethylene enrichment unit and the chemical reactor for epoxidation will take place at a demonstration plant located in Krakow. This will be the first plant for non-fossil EO produced directly from CO2, water and electricity, promising a radical innovation in the chemicals production sector. 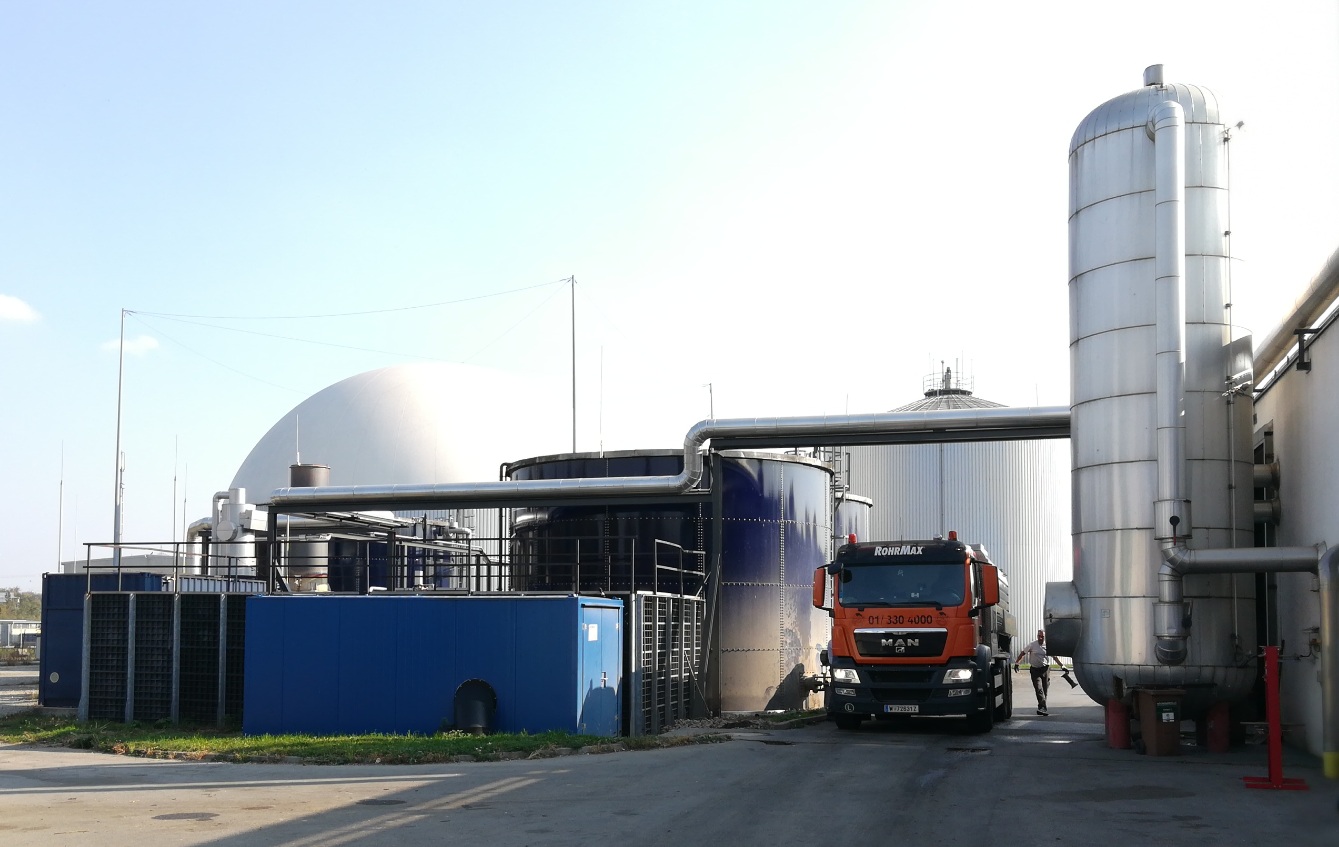 At the M24 meeting in Austria, the partners toured the CO2EXIDE carbon source, a biogas plant in Bruck an der Leitha. (PHOTO: AXIOM 2019)

The installation of the carbon capture device was successfully completed in the first half period of the project. Analysis of the purified off-gas stream from the biogas plant showed that the gas could be suitable for electrocatalytic CO2 reduction. Furthermore, a comprehensive study to validate the choice of the carbon source has been conducted.
One of the central developments of the project is an electrolysis cell that enables a simultaneous catalysis on both anode and cathode. Multiple materials for the catalysts and the membrane of the cell were tested. A prototype designed by Schaeffler is currently installed at the Siemens’ headquarters in Munich for measuring.
The cathodic process for reducing CO2 to ethylene currently runs at densities between 100 to 200 mA cm-2. Higher currents up to 350 mA cm-2 can be achieved but at the expense of selectivity. As for the anodic production of hydrogen peroxide, the University of Southampton has reached product concentrations of around 40 percent Faradaic efficiency at densities of 190 mA cm-2, which significantly exceeds previous research results. An overview of the concept definition and design guidelines for the electrochemical synthesis of H2O2 was published at Nature Reviews Chemistry 3 (see section Publications).

Share this Page
NEWS
CO2EXIDE has successfully co-organised the Sustainable Plastics Symposium on March 25, 2021. We would like to thank everyone for participating and contributing to the interesting discussions! Click on the link below to see how it went down and to access our presentations.
[ Click here ]
NEWS-ARCHIVE
The news archive contains previous editions of the CO2EXIDE-newsletter and thus provides an overview on the project’s activities.