Climate destabilization due to the high amount of greenhouse gases that are released into the air is the major challenge for the industry today. The need for a drastic reduction of these emissions also implies the exploration and implementation of technologies to capture these carbon emissions and at best recycle them for further utilization (CCU technologies). One of the most challenging points for a broad application of CCU technologies is the low reactivity of carbon dioxide: the conversion of the so-called „dead dog“ is highly energy-demanding. However, on closer observation of some industrial processes like the production of ethylene and its derivate ethylene oxide, this statement must be relativized.
Until now, the up to 150 Mio tons annual demand of ethylene is mainly derived from crude oil refinery processes. Compared to the conventional, fossil-based production, which needs high pressure and temperatures, the CCU process that is to be developed in the project CO2EXIDE might even lead to energy and emission savings. Catalyst performances in conversion processes of CO2 have lately resulted in compelling energy savings, and the innovations developed within CO2EXIDE will provide further process improvements. Furthermore, the CO2EXIDE process can be run with the fluctuating and decentralized power supply at renewable electricity production sites. A successful CO2EXIDE project could provide a clean, sustainable and flexible way to transform renewable electricity into chemicals for various applications while helping to strengthen our independence from fossil resources.

Power-to-EthyleneOxide –
Interlinkage of the electricity and chemicals sector

Renewable power sources that harness solar and wind energy have significant potential for reducing greenhouse gas emissions but are accompanied by several problems due to their fluctuating and intermittent nature. According to the IEA (International Energy Agency), by 2040, the European Union has more than 740 GW of renewables capacity, of which almost 70% is variable. Wind power takes over as the largest source of electricity supply shortly after 2030 and the high share of variable renewables overall places the EU at the forefront of the challenge to tackle large-scale integration of variable renewables. Worldwide renewables provide nearly 60 % of power capacity additions in the IEA scenarios and the following figure shows the expected future capacity of fluctuating renewable power sources in the world, which provide high potential for synergistic interlinkage of the electricity and chemicals sector with the CO2EXIDE technology.[1] 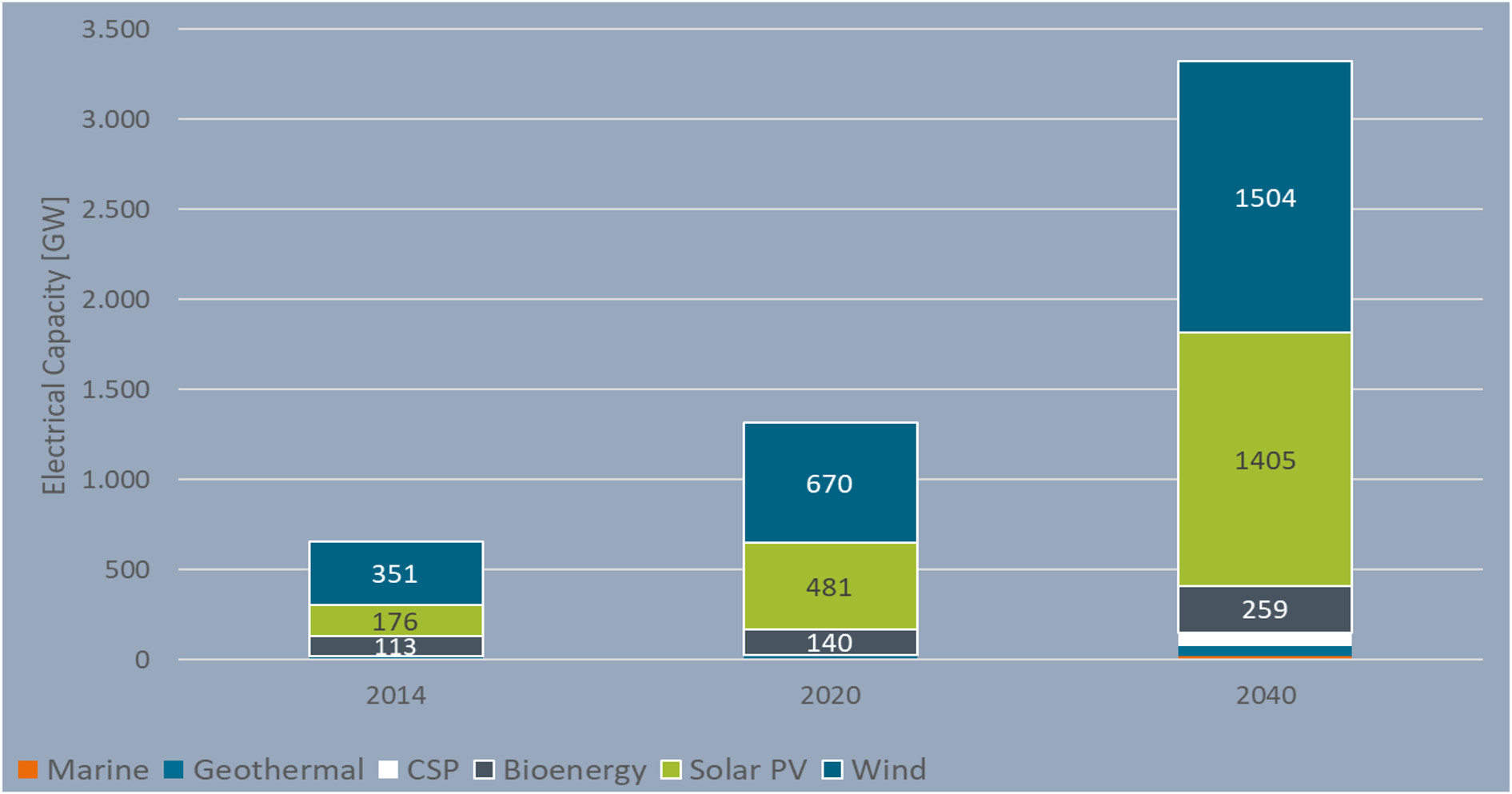 Ethylene Oxide (also known as Oxirane and Epoxyethane) is one of the most versatile chemical intermediates. It is used mainly in the production of ethylene glycols, surfactants, ethanolamines and glycol ethers. The global ethylene oxide & ethylene glycol market is driven by growing demand from PET bottle manufacturers and the textiles industry, and a growing global demand for antifreeze in the automotive industry. Ethylene oxide production on industrial scale is carried out mainly, by the direct oxidation of ethylene. At this stage, it is assumed that the CO2-based, renewable intermediates ethylene and hydrogen peroxide and the product ethylene oxide provide the vital option to substitute the fossil-based routes.
The CO2EXIDE project aims at the conversion of exhaust gas from biogas upgrading. Within the project the potential and limitations of green carbon dioxide sources for the electrochemical ethylene synthesis have been addressed in detail and based on projections according to production statistics ~ 506 Mt biogenic CO2 are generated in Europe p.a. via the processes visible below. 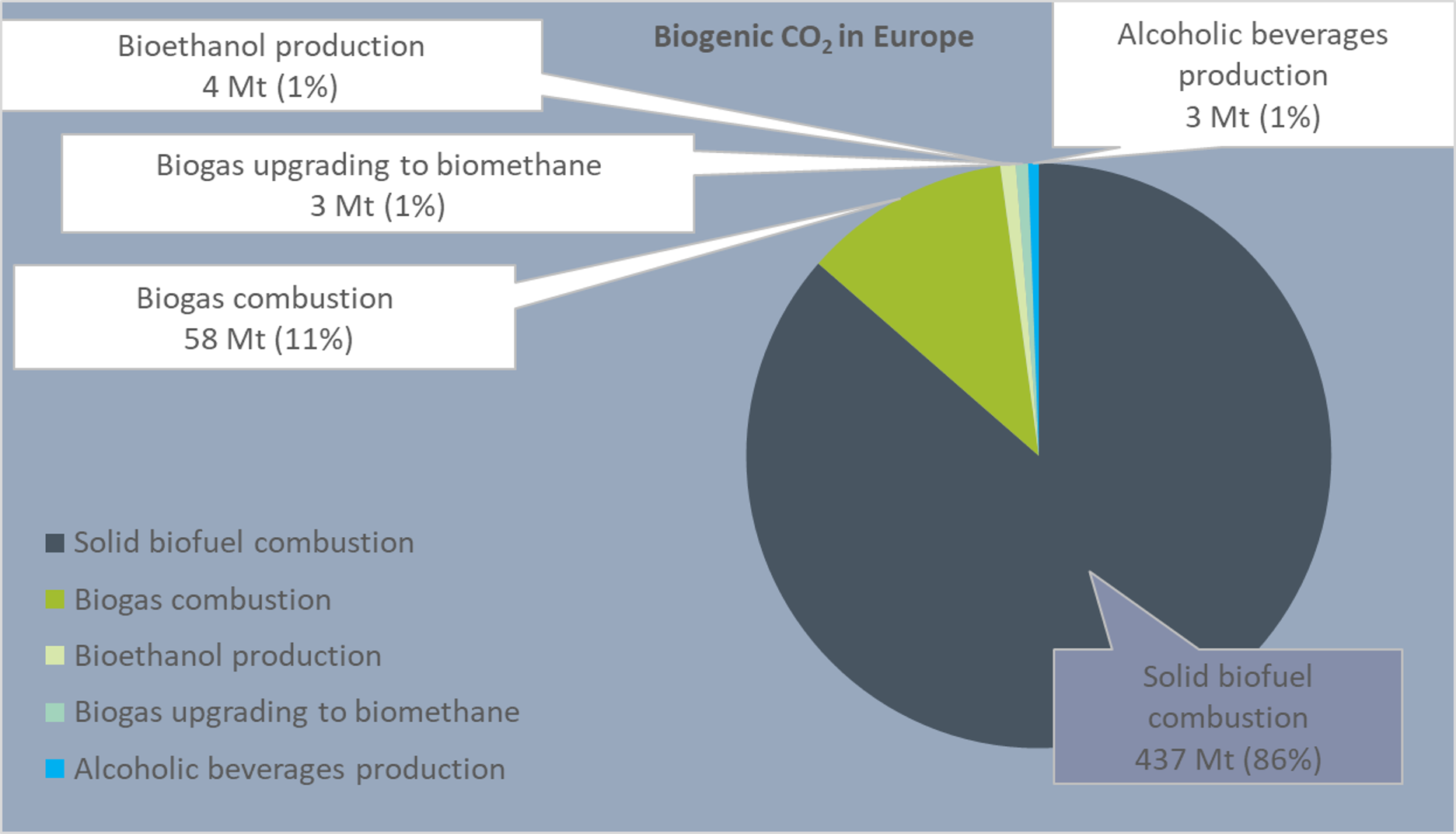 The detailed theoretical quantification and characterisation show that only part of this CO2 potential is available in reality for valorisation. Nevertheless, the amounts are vast related to the targeted utilization pathway in the CO2EXIDE project. Associated capture costs for CO2 are highly dependent on the source used. While capturing from diluted industrial flue gases (combustion of natural gas or solid biomass, refinery) ranges from 50-100 €/t, efforts for sources with high concentrations (biogas upgrading, industrial bioethanol fermentation, ammonia production, etc.) are substantially lower, reaching values clearly below 50 €/t.

Share this Page
NEWS
CO2EXIDE has successfully co-organised the Sustainable Plastics Symposium on March 25, 2021. We would like to thank everyone for participating and contributing to the interesting discussions! Click on the link below to see how it went down and to access our presentations.
[ Click here ]
NEWS-ARCHIVE
The news archive contains previous editions of the CO2EXIDE-newsletter and thus provides an overview on the project’s activities.